Current album that I’m listening to

Bob, my officemate has recently went to Medan, Indonesia. And it’s a normal thing he received a lot of cd buying request while he was there. So, I made request too, asking him to get the 2 Dygta albums (Persembahan Jiwa & Pecinta Sejati), and also all La Luna’s album that he can find.

But after he came back, he said it’s rather hard to find good cd stores in Medan, where he told me that he can only get the latest Dygta album. Dygta got latest album?

As a matter of fact. They do. Dygta – Bukan Kekasih Setia is their latest album. I’m so happy. Even though that Bob didn’t manage to get other CD that I ask his help to buy, this album already makes me happy. 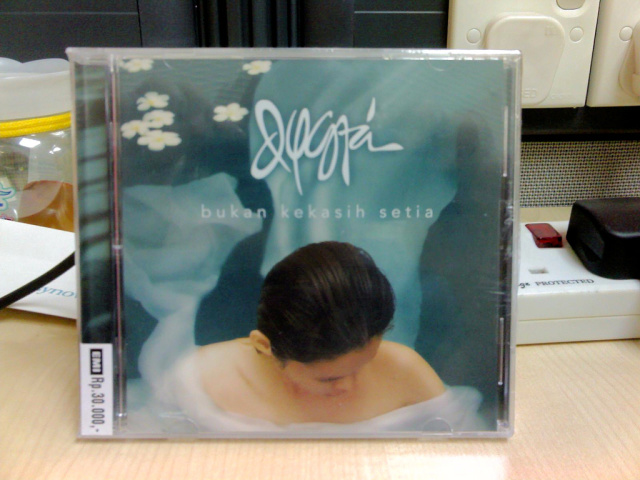 And here is the track list for this album.

Rp 30,000 for an original CD. That’s about RM11.36. Bloody cheap for original CD. If I ever have a change to go to Indonesia, I just can’t imagine how much CDs that I will buy there.

Anyway, I’ve been a big fan of Dygta for so long. But after listening to this album, I still like their second album, Pecinta Sejati the most, out of all their 3 albums. I bet Mala will be wanting to get MP3s for this album. Am I right Mala? Hehehe..

Well, do you know that you can peep at what I’m currently listening to at my Last.FM profile?