I promise. This will be the last shopping that I do for my new PC. Not long after I did my third round of shopping, I just have another crazy idea that I want to do to my new PC.

RAM (Random Access Memory) used to be quite expensive piece of hardware to get for you computer. I still remember using 286 and 386 machine with 4MB RAM, running MS-DOS and Windows 3.11. This is the year where personal computer still in 16-bit architecture, with the maximum 64MB RAM supported. Having 64MB RAM in computer is considered to be high end machine already.

With the launching of Windows 95, 32-bit computer era has begun. This is the time where more RAM is required to power Windows 95 so that it runs smooth. It’s the time where you will have 128MB or 256MB RAM for you computer.

Modern computers now use DDR2 RAM, where first time in history, getting 1GB RAM is very very affordable. 1GB RAM costs about RM48 these days. And getting 4GB can be still can be considered very affordable. But there is a limitation though. With 32-bit architecture, the maximum supported memory in theory is 2^32 = 4,292,967,296, which is approximately 4GB. But in reality, Windows XP can only support up to 3GB RAM, and Vista, is claimed to be able to support the full 4GB of RAM.

But what if you want more? The only answer is to start moving to 64-bit world. I’ve been reading quite a number of reviews about 64-bit technology. Even many said that 64-bit is not yet that ready for mainstream user, but over the years, support for 64-bit has improved tremendously, where I’m convinced enough to get started of moving into 64-bit world as well.

So the crazy idea that I mentioned above happened last Wednesday. I was in Pusat Bandar Damansara renewing my passport. Since it takes about 2 hours before the passport is ready for collection, I just decided to visit Digital Mall while waiting. And out of the blue, the idea of getting 4GB more RAM for my PC (on top of existing 4GB RAM, totalling to 8GB of RAM) just pop-up in my mind. So, the shopping list for today, as we speak… 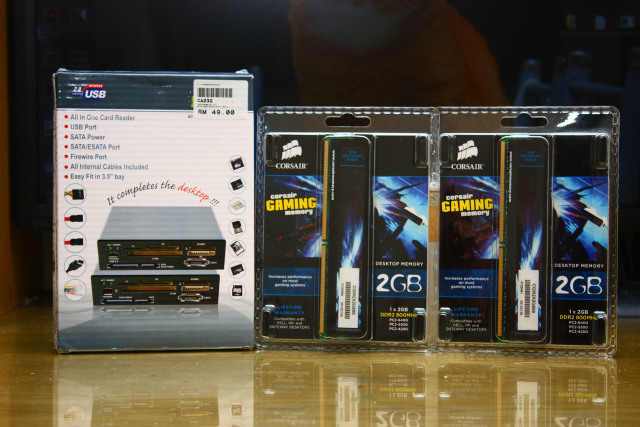 That is always my problem. There is always something extra that attracts me. I also bought this internal All in One Card Reader, which will complement my new Cooler Master CM 690 chassis.

But I still lack of something – 64-bit Vista installer. At the time like this, Mr. Torrent is always your friends. Muahahaha (Evil grin!). Oh my. Since Streamyx has throttled P2P connection, the download speed fluctuates a lot ranging from 2Kbps up to 35Kbps. And finally,

…sweet… The download completed at around 10:30pm earlier. So tomorrow will be a long day. It’s time to get started with things that I bought in the third round shopping, and this round of shopping.

Read the rest of the stories relating to my new PC