I woke up as early as 3am this morning, getting the final preparation done for my trip to London. I guess all checked. I have ticket and passport in my laptop’s bag, put all the money in my wallet, get all things packed in the luggage. Off I go to KLIA.

Thanks to my housemate for driving me there, where I spent the time sleeping in the car again with the little sleep that I had last night.

Arrived at KLIA, get my luggage checked in, and off I go to the satelite building for departures. The journey to Bangkok took about 2 hours, where I fell asleep again as soon as I’m on board, and wake up for a while during meal time.

Finally, I reached at Bangkok Suvarnabhumi Airport. This is the photo that I took from the flight’s window as soon as I reached there. 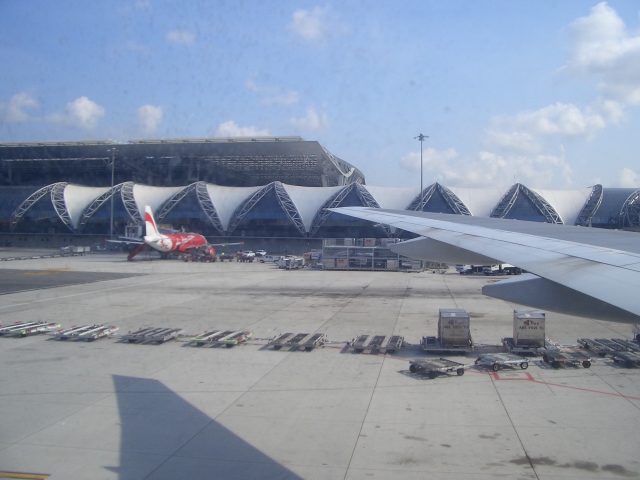 As soon as I’m out from the plane, I’m headed to “Transfer to International” area, 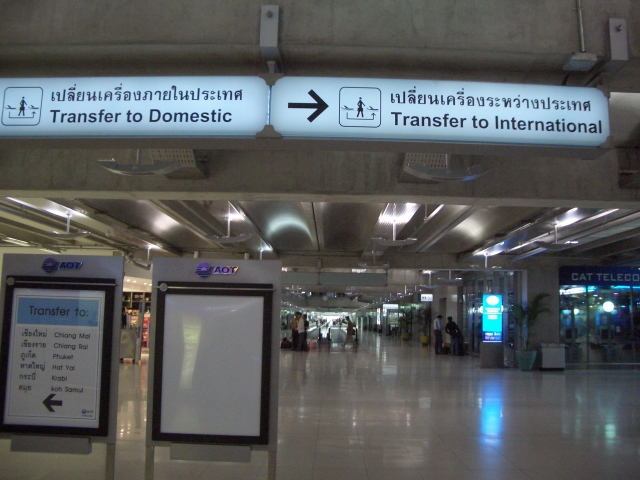 and check which gate that I should go for the next flight. 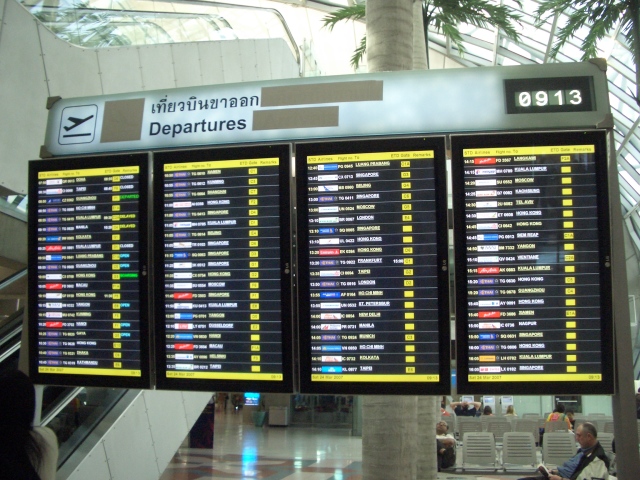 During my way, I found this interesting sign. Wow. At least here they have a big sign for this. I wonder where is the Muslim prayer room in KLIA. 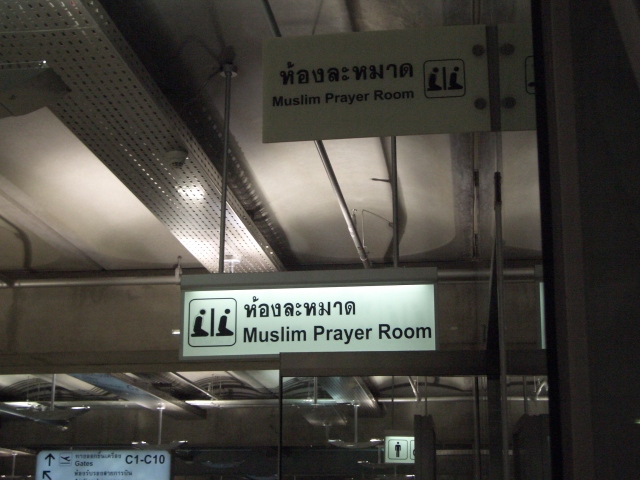 The local time when I arrived was about 9am, where my next flight to London will be at 1:50pm. It’s like I have almost 5 hours to kill during transit. Gosh. Only god knows how boring I am, and how tired I am. So, to kill time, what else better to do that to hook up on internet. Luckily the airport provides free wireless internet. 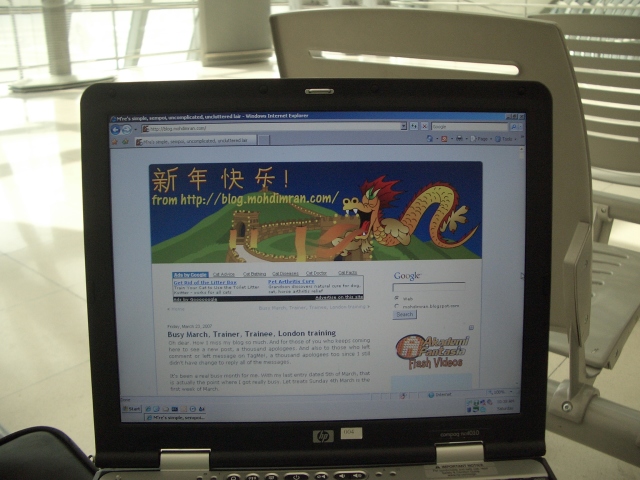 It almost time for my next flight, but before that, lets take a photo of the depature hall first.

As soon as I arrived at the gate, the flight is ready to be board.

If you notice, for the new Malaysia’s passport, instead of the original passport photo is pasted into the passport, it is actually being printed. During the passport check while entering the departure hall, I got stop by the staff there, and they spent almost 5 minutes verifying my passport. They also asked for my IC. I kinda feel mad as all the “mat salleh” in front of me got to get in without much questions. What they did, just look at the boarding pass, and let them go.

Anyhow, I got into the flight after that, find where my seat is, put the hand luggage into the overhead compartment, got seated, and fasten my seat belt. Then I look at the front, and, oh shit. Where is the screen? When soon I realize this flight only have centralized screen. “Oh tidakkkkkk!!!!!” How am I suppose to spend 12 hours on the flight just by looking at the centralized screen? Furthermore, I got window seat, and the screen is block by the head of tall “mat salleh” at the seat in front of me. This is not what I expected. The last time when I’m on MAS, every seat has its own screen.

So, what I do for the 12 hours in the flight? What else then to sleep and sleep and sleep. Just woke up for a while for the 2 meals that they have in between.

At about 7:35pm, London time, I arrived at London Heathrow airport. Oh. It’s been 6 years already since I last here, the time when I got back to Malaysia after my 3-year degree in UK. Nothing much changed I guess.

So, same thing that I need to do upon arrival is to go through the immigration counter. But again, another unpleasant thing happened here. Below is the conversation that I (Me) had with the Immigration Office (IO).

Me: Hello there. Good evening (pass my passport to IO)
IO: Where you from?
Me: Malaysia
IO: How long you’ll be in UK?
Me: About 6 days
IO: What you are here for?
Me: I’m here, sent my company for training in London’s office
IO: What kind of training?
Me: It’s a server setup training
IO: So, you already have a place to stay in UK
Me: Yeap. I’ll be staying at Premier Travel Inn, Putney Bridge
IO: Do you have any letter from the company?
Me: Yes (get the fax that I got from London’s office and pass to the IO)
IO: It doesn’t stated here where you’ll have your training
Me: Actually it’s written there on the letter, at the top
IO: Oh. It’s here. Synovate, Putney Bridge. So all the hotel cost will be paid by the company?
Me: Nope. I have to pay first, then I’ll claim from my company later (damn. why I be so honest)
IO: How much you have with you now?
Me: About 700 pounds
IO: Is there any other sources of fund here, if what you got is not enough
Me: Yes. I can always ask for money for London office here
IO: How much is it cost for the hotel?
Me: About 70 pounds something per night. You see, I should have more than enough money for that. Futhermore, I also have credit cards with me
IO: Ok. (not looking at me, stamp my passport, and let me go)

Lets face it. Islam and Muslims have gotten a very bad image nowadays, and we got to do something about it. Furthermore, my name is with Mohd and bin. They’ve been so paranoid about muslim getting into their country.

After that quite long interrogation from the immigration officer, now I can claim my luggage, and walk to Heathrow Terminal 1,2,3 underground station. I’m on Piccadily line, stoping at Earl’s Court station, and change to District line. 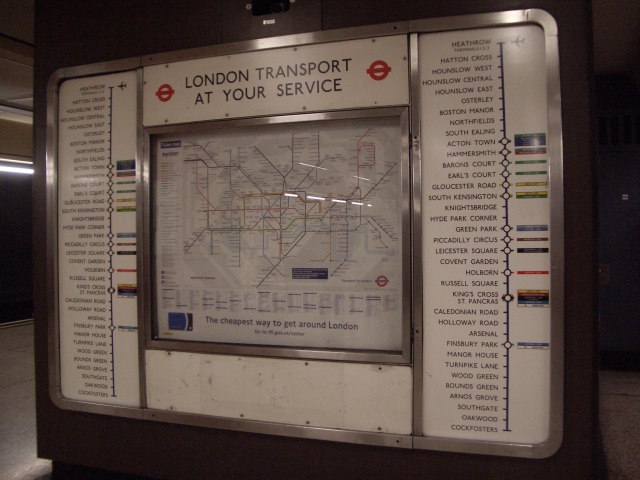 It’s quite easy to move around in London on tube after you have understand the underground network here. At I said earlier, I will stop at Earl’s Court station, change to District line to Putney Bridge station. Well, find where is Putney Bridge from the map below. 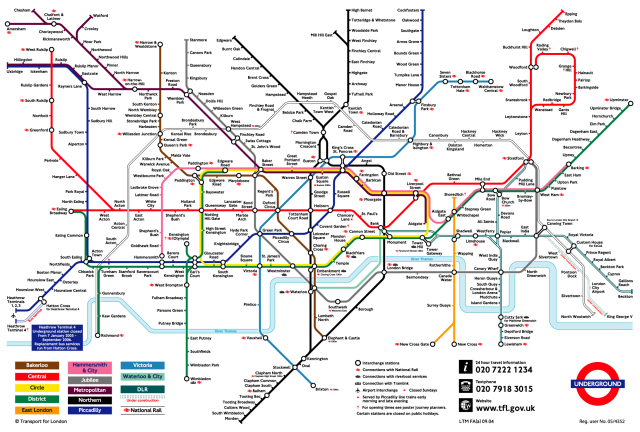 Something that I don’t like about UK is, the outdoor life there ended at 7pm. Usually, all the stores are closed at 7pm (and some earlier), and people started to get home, and never go out. It’s cold here anyway, and that’s the reason why the night time here is so solitary.

I got scared myself, travelling in an empty train, while carrying big luggage with 700 pounds in my wallet. If I got mugged, then that’s it.

Alhamdulillah, thanks to Allah for making my journey a safe one, where I finally arrived at the hotel. First thing that I do is to take a shower. Feeling so tired from the 19 hours journey (KUL-BKK-LON). 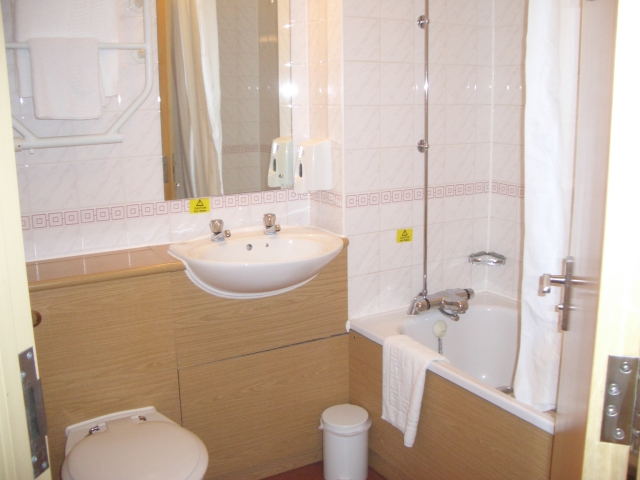 Then what else, I feel so sleepy. This cosy bed awaits me. 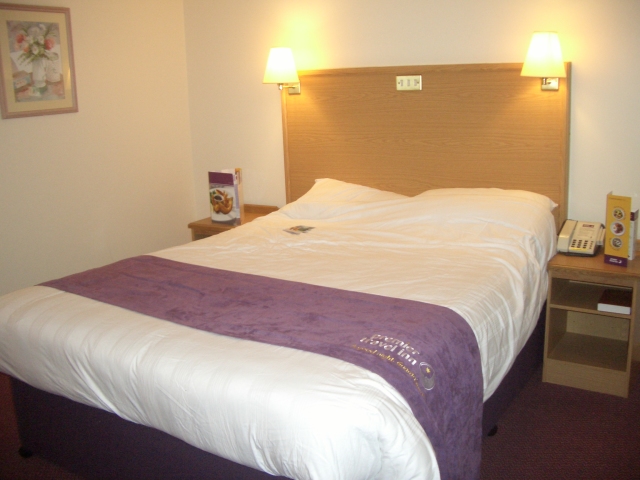 Good night. I really had a good sleep that night.