Finally, it’s the day today that I will move out from Pantai Hillpark. Last night was the last night that I spend here (cleaning the house). So earlier today, I gave a call to my landlord, and he said let’s meet between 9pm to 10pm.

I got there as early as 7:30pm to do my final cleaning up, throwing rubbish away and mopping the floor. Then, I just assemble all the keys to the house and to all the rooms that I collected from my housemates, tested it on the door and arrange it nicely.

I also prepared the tenancy agreement, proof that I have settled all the bills, car sticker and the proximity card to enter the gate at guard’s house. 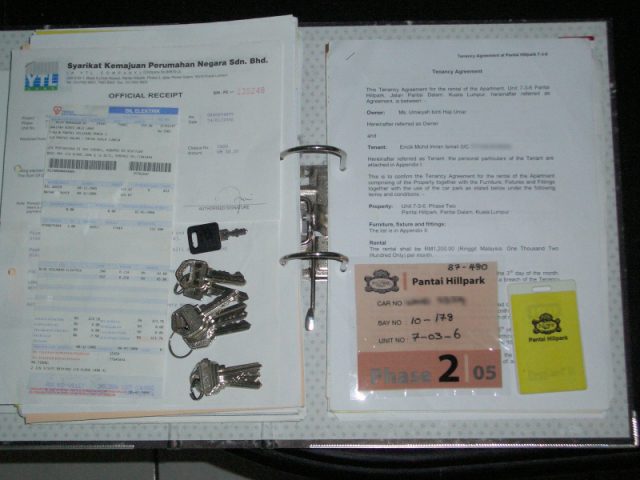 It’s 9pm. As usual, I’m not expecting my landlord to arrive sharp at 9pm (from my past experience when I need to see him). 10pm, he still not arrive. Gave him a call. No one picks up. 5 mins later, give him a call again, still no one pick up. Called her wife’s mobile, no ones picked up. 10.30pm, my housemate called him. Not picked up too. Then I gave his wife’s number to my friend, and my friend call. Ahh finally his wife picked up. Damnnnnnnnnnnnnn…. It’s really obvious that this guy is trying to avoid me. That old guy has my mobile and my friend’s mobile number, but his wife only have my number. So my reasoning is, when my friend called her wife’s mobile number, she thought that it is another person calling to enquire about the house to rent. So she’s picked up. I’m so damn hot….

My friend finally get a hold to the landlord. That old guy said sorry that he didn’t bring his handphone and left it at home. Bullshit… Handphone is like wallet or car keys nowaday. You can’t leave it behind just like that. And you know what happaned after that that makes me hotter. He said that he is outside with his wife and kids having dinner. He will arrive here in 1 hour time as he got to get back home first to get the cheque book. What. You and your wife eat at different table arr? When I called your wife’s mobile, why she’s not picking up the call? Why doesn’t she pass the phone to you for you to pick up?

Why this guy is so brainless. I told him since last week that I will move out this Thursday. And this afternoon, I called him again to remind him that we will move out tonight, and will pass all the keys tonight too, and he’s the one that said let’s meet between 9pm to 10pm.

He arrived at about 11:25pm. Stup*d. I’ve been in this empty house since 7:30pm, keep yawning in boredom, and I only get to meet him at 11:25pm? He said sorry… He’s so tired today. Just came back from Lumut. And when he got home, his wife ask him out for dinner. You know women. I think you’ll know when you get married. Also I’m leaving to Bangkok tomorrow night with my wife bla bla bla bla… Yeah yeah… Whatever…. Like I care…

There are also this bunch of letter for the landlord that I collected all this while. Looks like lawyer letter to me. So I pass to the landlord at the same time.

After he opened it, yes, it is from the lawyer firm about the court action of not settling Indah Water bills for 4 years. I have a bad feeling about this. A very bad feeling.

Then, at the time the landlord wants to write the cheque to me, he said that he needs to deduct the Indah Water bills from my deposit too. It’s RM8 a month, a total of RM96 for my 1 year stay here. F**k… F**k… F**k… F**k… I feel sooooo regreted to give those letters to him. I should have only left it in the mailbox. Damn! Damn! Damn!

So, here’s the cheque that I get after that amount has been deducted. Sob sob sob 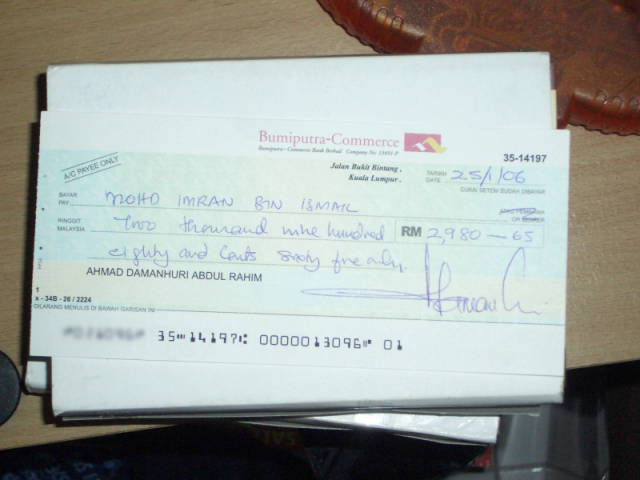 But my deal with my previous landlord doesn’t end here until the cheque that he gave has been cleared. Who knows it’s a bounced cheque. I told my housemate about that possibility, and he just have an idea on what to do if it’s true (the cheque is a bounced cheque). I just hope that the cheque can be cleared and we don’t have to do what we have planned if he cheated us. Muahahahaha….

Added on 29th January, 2:59pm
The cheque is cleared already. Now I can close the case. My business with that old landlord of mine is over.