Anyway, about Thursday last week, my testing server is really slow. Really – really slow until I get really sick of getting things done. Doing a http request takes 5 to 10 seconds before the page is displayed. And connecting to the machine from Windows using X-Win32 X Window server and XDMCP protocol is way too very slow. Both my PC and the server is on private network. It should be blazing fast, and used to be blazing fast.

So, report that to IT. The first thing they did is checking my PC as they think my PC is slow, and not the server (or the network). Darn! My IT manager found out all the illegal softwares that I installed on my PC.

Well, my PC has been set up in the way that, only they can install or remove software on it. All of that I ranted here. So he kinda suprised how I managed to get all those software installed. Well, if you want it, you will do whatever. I better keep secret on how I’m able to do it. Hehehehe. Anyway, my PC is ok. When I try to access my test linux from some other PC, it also slow. So it’s not my PC problem. So the troubleshooting process begins:

Assumption 1: Network cable error
The server is placed in the rack mount. So I took out the server, and connect it using LAN cable from other network port. Nope. The speed is still slow. It’s not the network cable error or switch port error the.

Assumption 2: OS going haywired
So my second assumption is that the installation of Linux has gone haywired already. My test Linux server was using Fedora Core 3. So I guess, it’s best to reinstall the server using Fedora Core 4. Did all the database backup, files backup, and reinstall Fedora. Oh no. It’s still slow.

Assumption 3: Harddisk damaged
So my third suspicion is maybe due to the harddisk is corrupted. Somehow the harddisk gets slow. So, I ask for a spare harddisk from IT, put it in the server, and doing the Fedora installation all over again. The result, it’s still the same. The server is responding really slow to any request.

Assumption 4: Network card damaged
So I come to my forth suspicion, that is, network card problem. Maybe there’s lightning strike that burns the circuit of the network card that my test linux server is using. So again, get another network card from IT, replace it, reboot the machine, and test. Darn…. It’s still slow.

Assumption 5: PCI slot that the network card uses is damaged
This also can be a reason. So I move the network card to other empty PCI slot. But it’s no good too. The response speed of the server is still slow.

And my final attempt, of which I thought will give no good too is to change the static IP that the machine is using to obtaining the IP automatically from DHCP server. 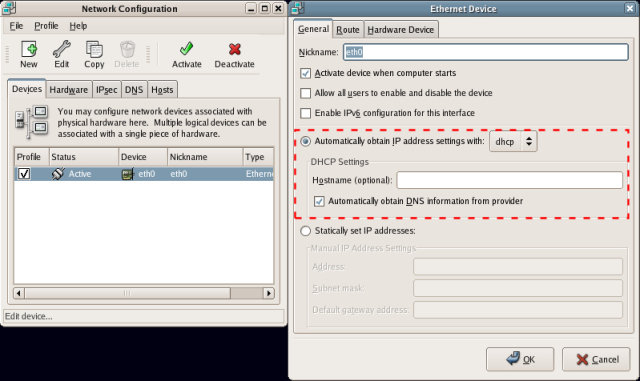 Oh crap. After all of those lenghty and time consuming troubleshootings that I did above, it just happened that the static IP of 10.69.96.23 that I assign to the machine is conflicting with an IP of other server. That’s why it’s slow.

Strangely, I get this static IP from IT people, who keeps track of all the static IP used for all servers that we have here in this company. How come the same IP is assigned to other server?

Well. Don’t want to bother them. I just use the dynamic IP assigned by the DHCP for now. Hope that they didn’t do any subnet mask change, or else, my test linux server will have a new IP address, and I have to go through the trouble of going to server room and check what new IP it has from the terminal itself, physically.