The release of iPhone OS 3.0 is just around the corner. Even though it is just another a week away (morning of 17th June in US is almost 18th June for Malaysia), I kinda feel so eager to start using this new OS for iPhone.

The article on Gizmodo website titled iPhone OS 3.0 Now Available in Torrent really moved me. I finished downloading it Tuesday, and last night I just convinced that I’m too impatient to wait the official release, and decided to install this on my iPhone. According to the article, this one is the golden master, which Apple will distribute next week. But if this is not the final one, I can always upgrade later next week 😉

There’s a page on Apple website listing out all the new features that OS 3.0 has got to offer. I hope that the topic of this entry has not misled you. I’m actually recapping those features with Malaysian iPhone user in mind. Let’s go through a few features that I feel like highlighting, shall we?

There are 3 different things that I notice on the Home Screen.

This is the very first feature that I test as soon as the installation of OS 3.0 on my iPhone finished. The missing of this option previously is very uneasy. I guess the service is not like normal MMS service that we set up on any other phone where the setting can be obtained from Maxis website. Also, there’s no option of setting up the MMS parameters in iPhone.

I use my house mate’s Nokia 5800 XpressMusic for testing as well, and the result is… 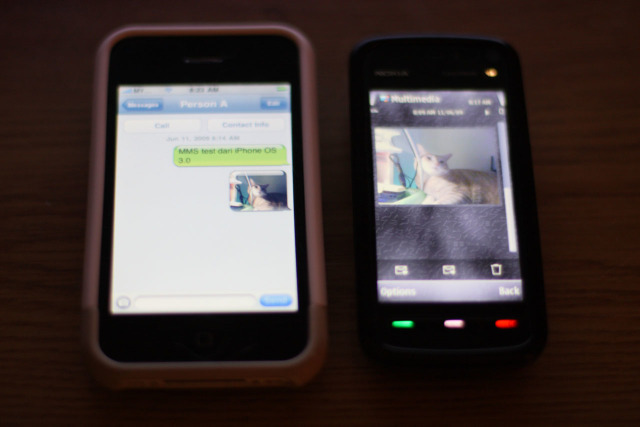 …it works already on Maxis. While in the US, AT&T will only offer MMS service late summer. I guess this is a thumbs up to Maxis of having this ready just before the new OS arrived, even the crappy 3G connection speed that I’m getting is still bothering me.

So, I’m able to send MMS. What about receiving one? Well, lets test that as well. 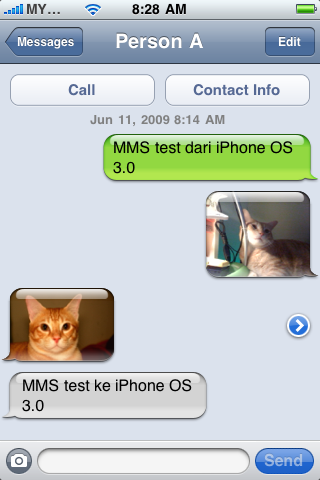 Yeap. MMS features seems to be working fine with the iPhone OS 3.0 on Maxis network already.

Every iPhone user must already feeling the pain of not able to delete individual SMS message last time, as well as forwarding any SMS received. This has been fixed in OS 3.0. You can now delete individual message, or forward it, and it works on both SMS and MMS. 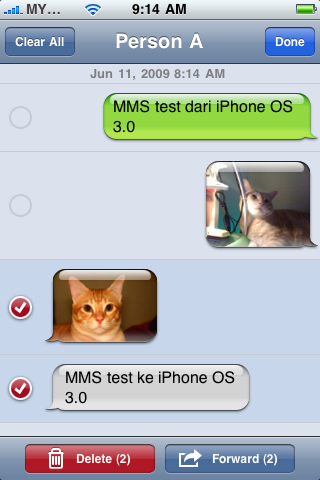 Malaysia wasn’t even in the list of countries that iPhone will launch at the time OS 2.2 is out. And when it’s out, the best time zone location that we can select is Singapore. Now Kuala Lumpur is already in the list. 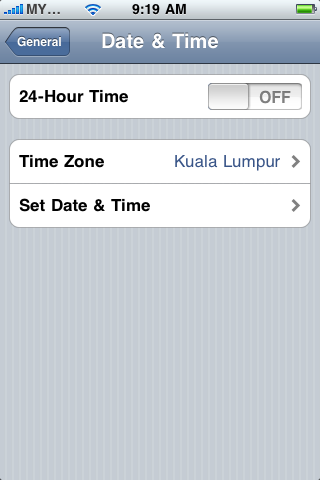 You can also change the language of the whole iPhone itself to Bahasa Melayu. And this is how it looks like when Bahasa Melayu is used. Hhhmmm. ‘Messages’ is still called SMS. It should be Mesej instead 😉 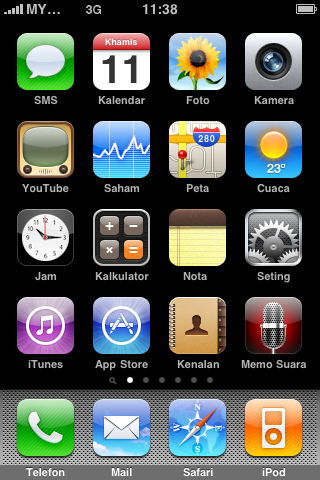 iPhone is using software based intelligence keyboard where it predicts, suggests and correct words as you type. This feature works well when typing in English last time, but how often that I write SMS in English 😉 I end up having this feature turned off previously as it’s really annoying suggesting unrelated words when you are typing in Malay. And you can’t change to Malay language as well as it’s not available. Not anymore. OS 3.0 now offers Malay language as one of the keyboards language that you can choose. 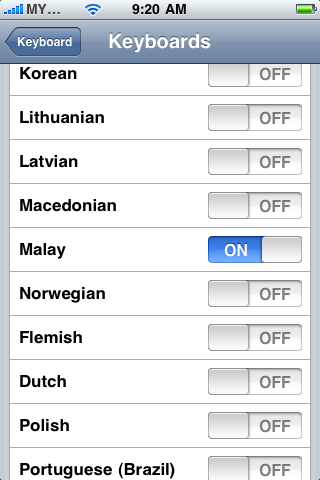 Once Malay language selected, you can choose Bahasa Melayu as the keyboard language whenever you need to type something. This is another mostly awaited feature, which also a big pain in the previous OS of not able to do this. I tested this feature, and like it very much 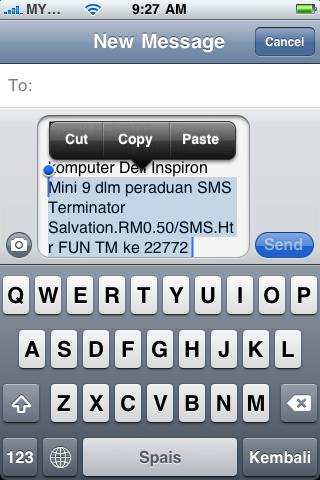 Originally introduced in MacOS, now this feature is available on iPhone OS 3.0 too. 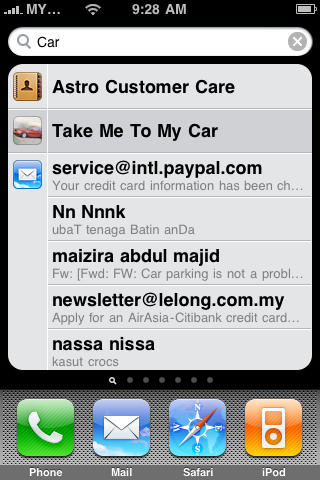 This will search everything on your iPhone of the items matching the search text that you type. What to be included in the search results can be customized from the setting. 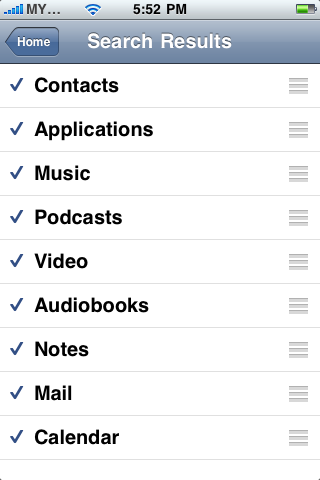 One of the feature that I enjoy a lot on Windows Mobile platform (when using HTC Touch Pro last time) is using the phone as the modem. That time I have unlimited data plan with my Maxis Value 50, and I’ve been using it as modem to connect to the Internet when I’m on the move.

Can we do the same on iPhone? Nope! Unless you jailbreak your phone and install one of the third party application. I think this feature is vital. With the data plan that we have with Maxis iValue or iData, there’s no way that we will full utilize that just on iPhone. Fear no more my friend as OS 3.0 now offers Internet Tethering – sharing your Internet connection on iPhone with your laptop or desktop via Bluetooth or USB.

The same article that I mentioned earlier at the beginning of this post suggests that AT&T will only offer tethering only by end of this summer, and via a special data plan. I hope it’s not the case with Maxis, and lets test it just to make sure.

Tethering can be enabled at the Settings -> General -> Network. 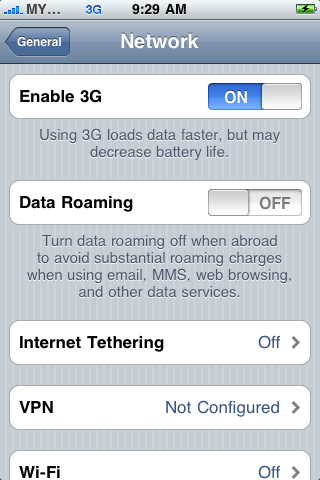 Once enabled, your Windows should detect a new hardware now. In Windows XP it is detected as Apple Mobile Device Ethernet.

Once the driver is installed, iPhone is treated as another Local Area Network connection, and once connected, your laptop or desktop is connected to the Internet already.

And on your iPhone, there will be a flashing bar at the top of the screen with the text Internet Tethering 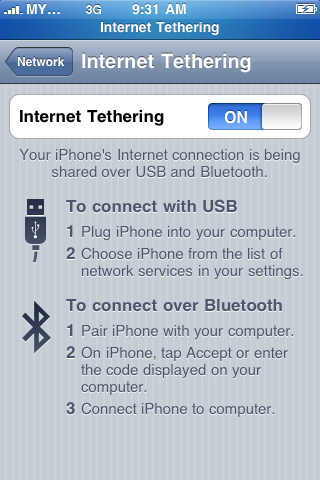 This bar will be shown everywhere, I guess as a visual alert that the Internet connection of the iPhone is being shared by your laptop or desktop. With all of these new features introduced, I do believe that iPhone will now become a worth piece of device to own. Furthermore, the slashing down of the price of 8GB iPhone 3G (with the introduction of 16GB and 32GB iPhone 3G S) will definitely attract more new iPhone users. So what I’m eagerly waiting for next is how Maxis will offer this, and what’s the price will be 😉