If you been reading various website about Xbox hacking, you will come across the fact that Xbox is basically a PC, disguising as game console. It runs on custom Intel Pentium-III processor and has custom nVidia graphic card, 10/100 Base-T etherner port, 4 usb ports disguising as 4 ports for controller, hard disk and DVD-ROM.

Thanks to the hackers out there, they are somehow come out with a way of fooling Xbox so it believes it actually a PC. With that, there are a mass possibility of custom and homegrown softwares created for Xbox (although this is grown illegally).

And one of it is Xbox Media Center (XBMC). Well, you can read more about it at http://www.xboxmediacenter.com/

Basically, this is my latest obsession now, setting up media center at home. One feature that I like about Xbox Media Center is the ability to play stream media right from your computer, using XBSMP (Xbox Streaming Media Protocol) or SMB – this one is simply normal Windows share, and many other streaming protocols. I’m using SMB as it doesn’t need additional XBMS (Xbox Media Server) running on your computer. 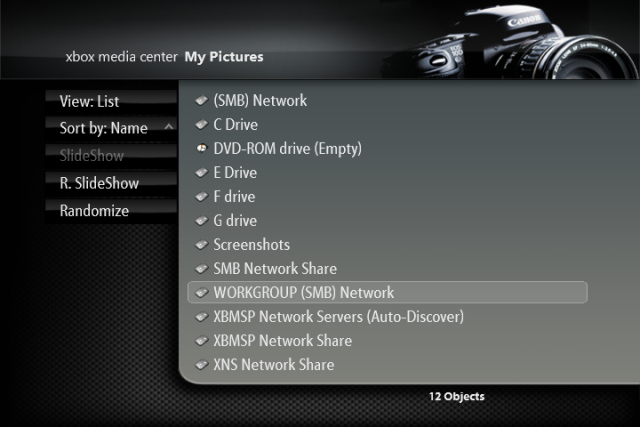 All I have to do is share a folder or a drive on my computer, then from Xbox running XBMC, I can access every single folder that I shared on my PC, like below. 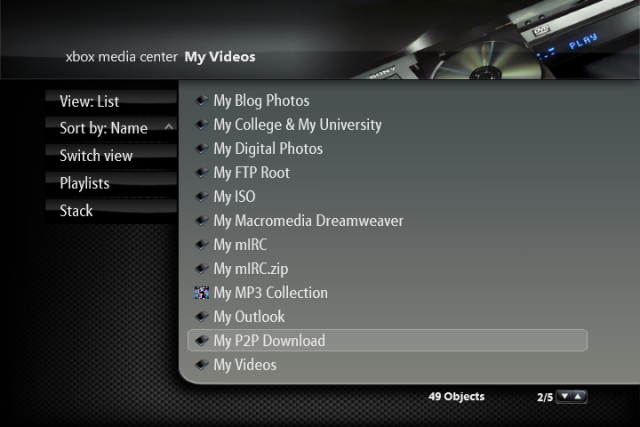 The first option in XBMC that is useful to me is My Pictures. 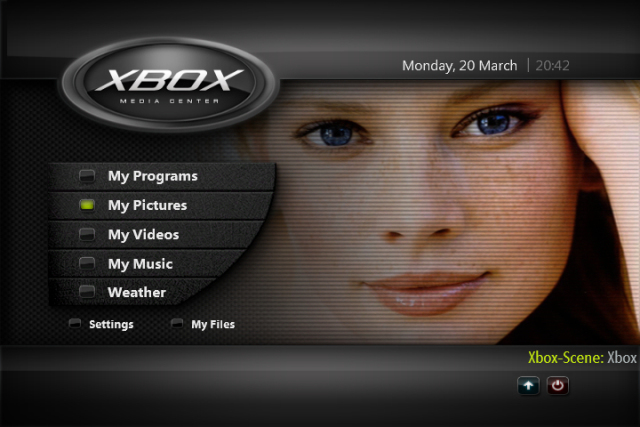 It’s a way of digital living already where you take photos using your digital camera, transfer it to your computer, and view it from TV with your families or friends.

I have loads of digital photos (worth 10GB of space) on my computer from my various trips. Now I can watch the slideshow from my PC. Guess I just don’t want to show them here 😀 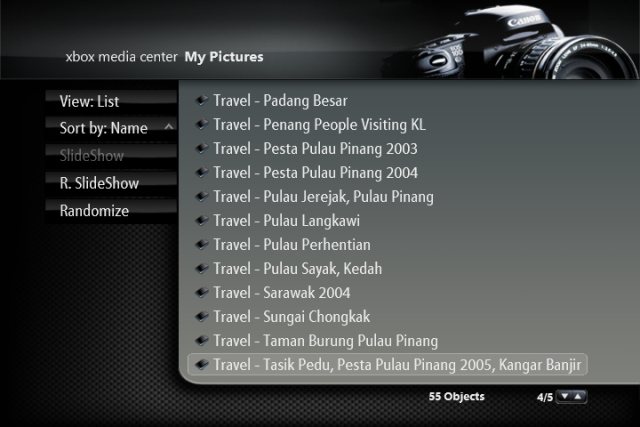 The next one is My Videos. 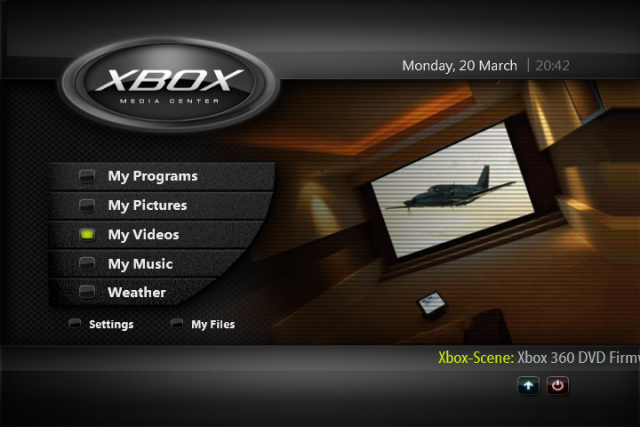 Thanks to torrent and other P2P softwares, I get to download various of movies, video clips and music video. You may be aware that these files can come in many formats. Normal MPG is good. But sometimes, there are in DivX, WMV, MOV, M2V etc. Traditionally, your are bound to watch these files on computer. To watch it on TV, those files need to be encoded to MPG first, and burned to VCD. 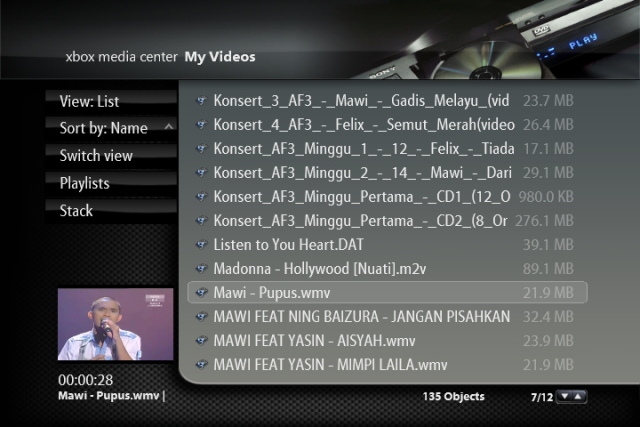 XBMC can play various format of video files. I even suprised to see that it can actually play 3GP movie file that I recorded using handphone. And it even play a weird encoded Divx file that can’t be played on PC.

Sometimes the video file that you are going to play is large. XBMC will cache it first before playing, the same as streams are buffered when you are trying to view streaming movie from internet on your PC.

And the last useful thing that made up media center concept is My Music. 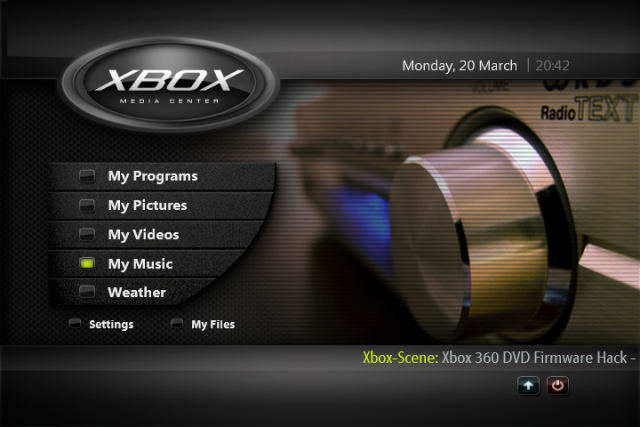 Same thing, I can browse my MP3 collection on PC. 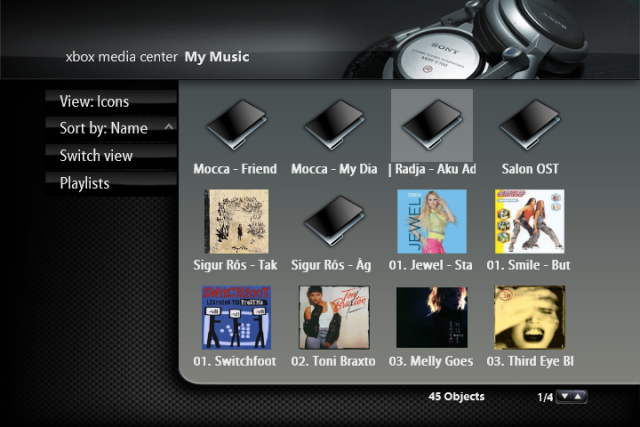 It also has a nice visualisation when the MP3 is played. The thumbnail and song information depend heavily in ID3v2 of the MP3.

Before, I don’t really give a damn to this ID3v2 thingy, until I own iPod. itunes uses information of song title, artis, album and album cover to organize its playlist. Same goes to iPod (well, only iTunes can upload songs to iPod). It’s quite a hardwork at the beginning, tagging my previous MP3s that I never did any tagging before. But with the help of Tag&Rename software, I can get things done quickly.

For any new MP3s that I just downloaded, it’s become part of me already to tag the ID3 properly first. And for the MP3 that I know the album and have the cover of the album, I just assign it to the MP3 as well. So that explains why I have this Album Cover set in my Flickr.

Now, the only thing that I lack off is this Xbox High Definition AV Pack. With that, i can hook my Xbox to my home theatre system using optic cable, and have a superb sound while playing games and wathing my streaming movie.